2 Recommended Converters Used to Change F4V to FLV with Tutorials

Adobe Flash Player supports F4V and FLV as a container for playback media to stream content from the internet. Although the format is Adobe-based, still these two are different in a lot of aspects. For example, the data encoded on FLV aren't the same as the F4V because FLV has SWF likeness. Moreover, if you want to convert F4V to FLV and have an encoder like SWF, then read this article to know more.

Part 1. 2 of the Most Pick Converter to Convert F4V to FLV

FVC Video Converter Ultimate is the highly recommended F4V to FLV converter you can download on your Windows or Mac. This tool has the fastest and most reliable converting process you will ever encounter, and it already satisfies millions of users. Further explanation, converting format is not the only strong suit of this tool. Guess what? You can also edit here, like cutting the video, merging, boosting the audio, crop, and more. If you want to have a unique converter that will suffice your needs, this converter is the one. The following details below are steps on converting your F4V files into an FLV format within a matter of minutes.

How to Convert F4V to FLV with the Help of FVC Video Converter Ultimate:

Step 2. Click the software to open it, insert the file by clicking the Add Files at the upper right part of the interface, and click Open once you have selected the F4V file you want to convert. 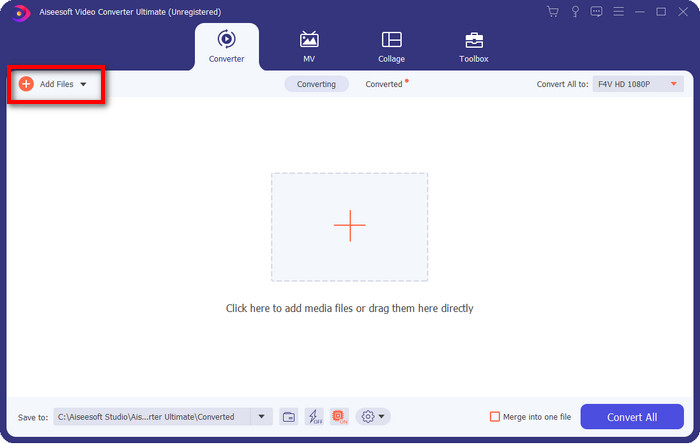 Step 3. Hit the Convert All to button and change the format into FLV. 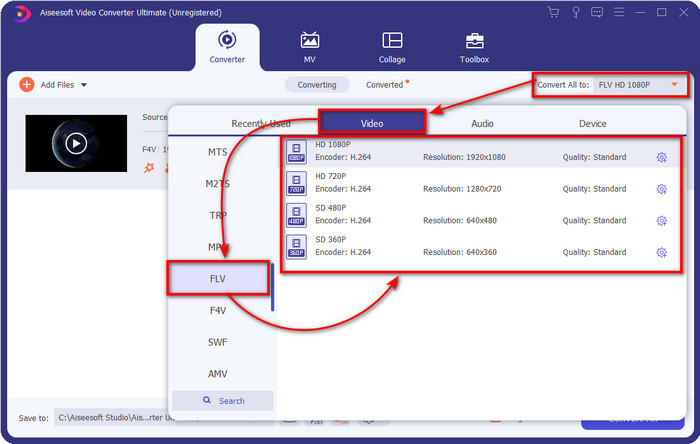 Want to make the video shorter? If so, click the scissors icon. Adjust the handlebar according to the length you want to have, then click Save to save the changes. 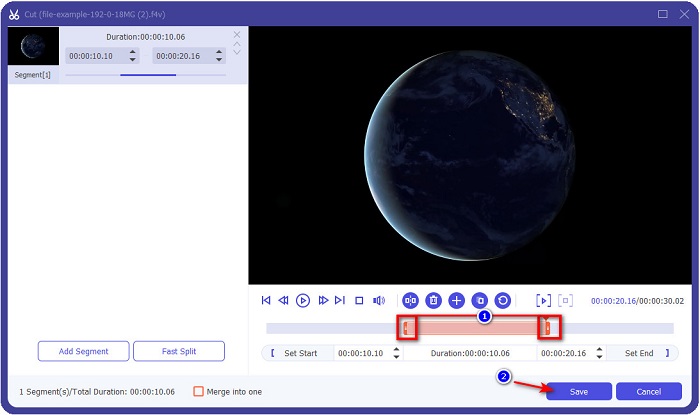 Step 4. To change F4V to FLV, click Convert All, and the process will begin quickly. A computers' folder will show where your file is. 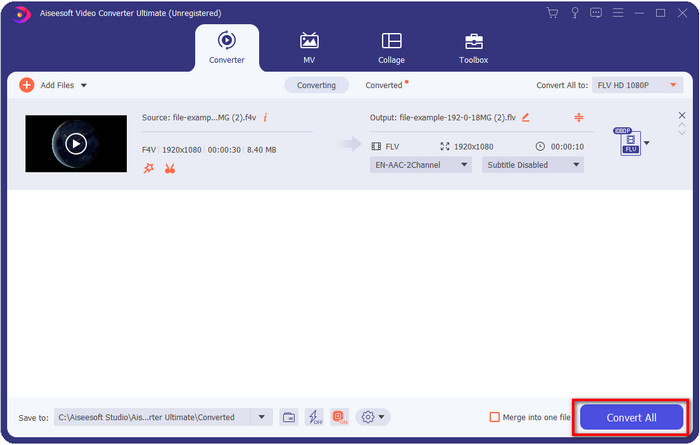 FVC Free Video Converter Online helps you make your conversion process done online. This tool is available in all browsers to convert F4V to FLV online without limitation. However, you can't do a batch conversion here because it is not supported. Nevertheless, you can achieve the format you want to convert with this online converter. Want to know how? Then follow the steps below.

How to Convert F4V to FLV with the Help of the FVC Free Video Converter Online:

Step 1. To open the web tool, you must click this link.

Step 2. On the main web converter UI, click the Add Files to Convert button. Find the F4V file on the folder that will show and press Open. 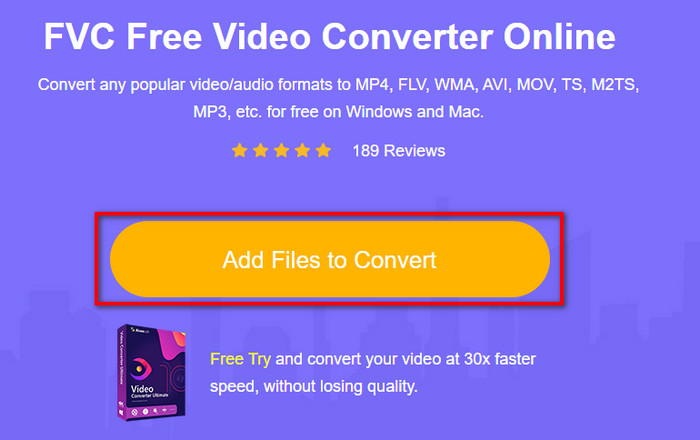 Step 3. At the bottom part, there are a lot of formats you can choose from; click FLV. 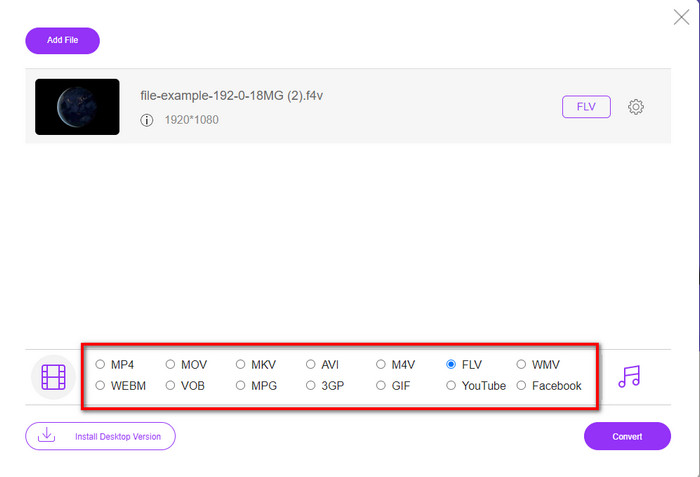 Want to change the resolution of the video? Then click the cog icon, hit the drop-down, and choose the video quality. 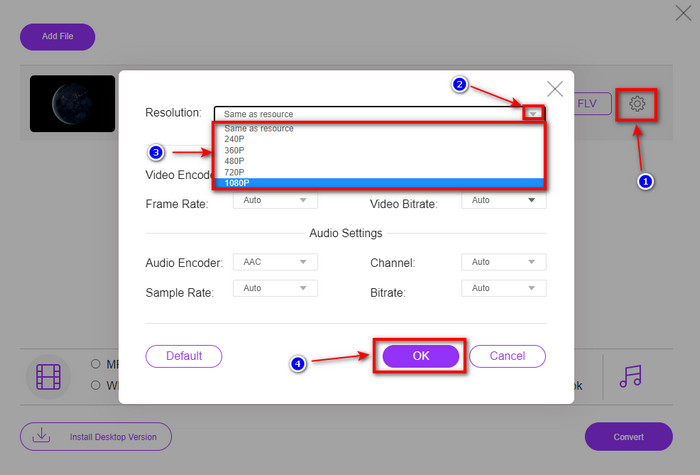 Step 4. Begin the converting process of F4V to FLV by clicking Convert. 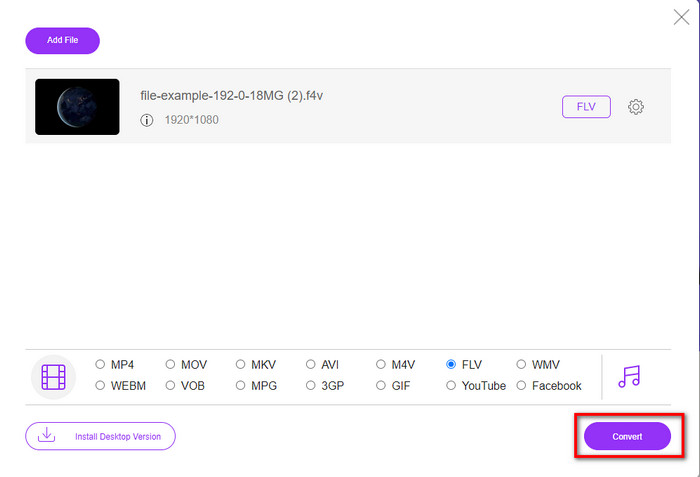 As said at the beginning, these two formats are Adobe containers you can use to distribute them on the web. But now, let us compare the differences between the two formats by reading the details below.

F4V format is a Quicktime container like the MP4 format. It is an ISO base media file format for streaming videos over the internet. Also, this format is an upgraded version of FLV. Still, there are a lot of problems in encoding video and audio that are on FLV. Additionally, you cannot generate an HTML webpage like FLV can do for you.

FLV is files that have almost the same structure as the SWF. This format is more supported in Adobe Flash Player and most HTML 5. It supports video and audio compression like the Sorenson Spark or VP6 codecs. Moreover, if you consider downloading a video on the web, this format is the best choice. Unlike F4V, if you want to generate HTML on your web page, this is the format for you.

It would be best to convert F4V to FLV because the benefits you would get on FLV that aren't available on F4V. Although it is said F4V is the new version of FLV, still the uniqueness of the FLV is one of a kind that the F4V can't copy in many aspects.

How can I play F4V videos?

With the help of the powerful media player, you can do it without breaking a sweat, and the best example is the Aiseesoft Blu-ray Player. Follow these simple steps to know how to play F4V files. The first is to download the software on your desktop and launch it. Upload the file on the tool by clicking the Open File. After loading, the file will play automatically.

Which is better? F4V or MOV?

Well, it depends on what purpose you want to use it. For example, F4V is great at distributing media files on the web without quality loss. However, if you're going to edit videos on Mac, go with the MOV. So, if you want to edit your F4V videos on Mac, you must learn how to convert F4V to MOV.

F4V files can contain 1080 or 720 video quality, but the file size will remain minimal.

Now that we learn how to change F4V to FLV with the help of the converters, it is now the right time to pick your reliable converter based on the reviews. If you want to experience a free online converting process, you must use the FVC Free Video Converter Online. But this webtool can't outperform the ultimate converter at the top. Without introduction needed, we prefer to use the FVC Video Converter Ultimate since it does your job of converting easily and faster. This phenomenal converter is one of a kind that impresses many users with its unique features. So now, we can say that we are now one step to success with the help of these tools.