Comprehensive Review about the Android Screen Recorder on Your Android Phone

A screen recording can sometimes become handy if you want to capture what's happening on your screen for future purposes. You can easily record a meeting, classes, presentation, professional gaming, and more, then share it with others. Far from traditional video recording with a camera, this program does film the on-screen activities only and not the off-screen.

With a mobile device like Android, screen capturing is easy for everyone to do it. Although capturing the actions on your screen is easy, choosing which screen recorder app you must use is still challenging because many are on the PlayStore. Instead of reading the information per tool and reviewing the users who use it, which would take a lot of time, we pick the top five tools you can use on your Android. To have an idea of these five Android screen recorders we pick, you must keep reading this article to know them better.

Part 1. Top 5 Android Screen Recorders You Must Download or Use 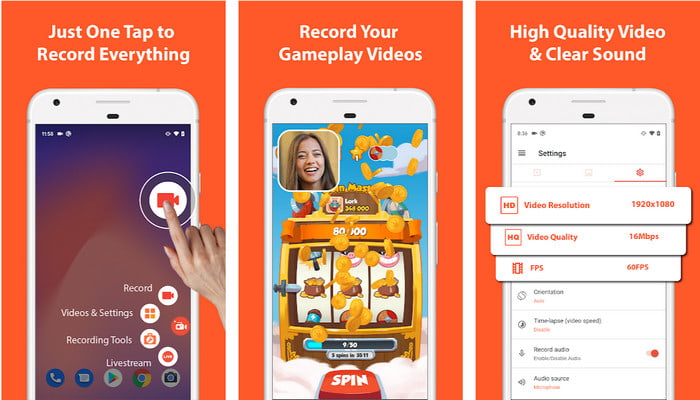 AZ Screen Recorder is a popular and best screen recorder for Android you can download on your mobile phone. With this app, you can easily do a screen recording without root or limitation on the recording. Also, this app allows you to record 1080p with 60 FPS, which is great for high-quality and smooth game recording, video tutorials, live show recording, and more. You can also do an audio recording with Facecam, which is great if you want to add your voice and face to the recording. Unlike other recorders, this tool allows you to choose what type of recording you want to use or do live streaming if you're going to. In addition to its recording ability, you can also use this app to edit the recording you did on the film.

Although we can see that the app is great and gives you many options for on-screen recording and editing, there are still drawbacks. First of all, the app does work with an ad, which means if you use the free version of it, there will be ads that will pop up on your screen. It could be unpleasant for most of us, especially if we record the game we are playing, discussion, or what's happening on our screen and the ads are bothering us. While using it, some of the comments on the review indicate that bugs and glitches have been happening lately, and sometimes it freezes. Nevertheless, it could become handy if you use this app as a personal screen recorder. 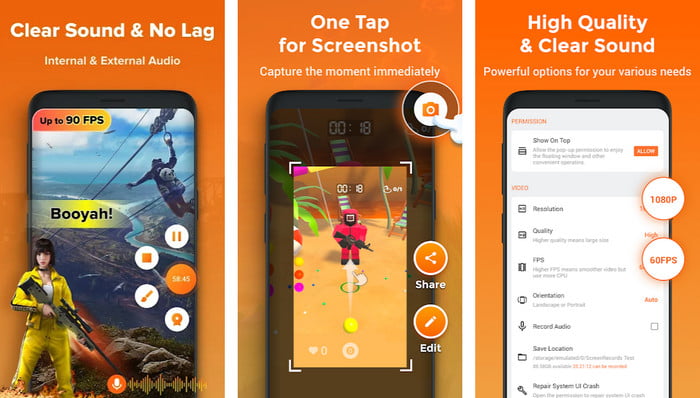 Xrecorder is another screen recorder app for Android. Same as the first app, you won't need to root it before you can do a recording; download it and use it right away. It also allows you to do an on-screen recording with a 1080p with 60 FPS, which is a good choice for recording with a smooth and high-quality output. With it, you can also do an internal recording if the version of your Android is ten or up. So, if you want to use the tool to record, there is nothing much to say about the app, for it will give you the best output when you export without a watermark.

On the contrary of being a choice on screen recording, some problems may occur while using it, such as it doesn't do a screen recording while on other it works perfectly fine. Then, when they tried to record the internal music playing on SoundCloud, it didn't do an internal recording. Possibly, you might need a microphone to do an internal recording. It is still great, and maybe you might like to use this to record high-quality video recording on your Android device. 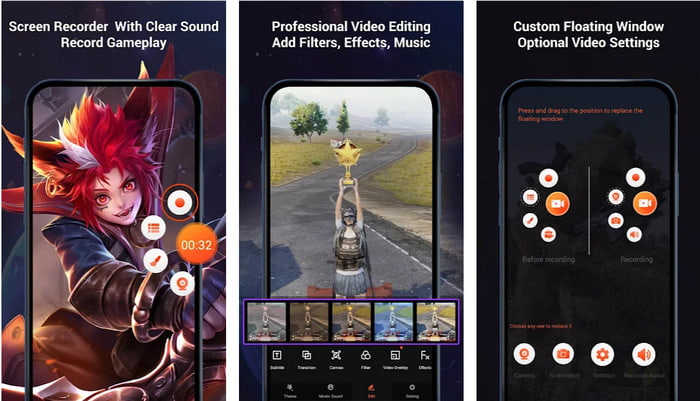 Record everything on your screen without rooting the app; then, Screen Recorder Video Recorder might be the video screen recorder on Android that you want to use. With over a million downloads, we can see that the screen recorder developed a good reputation for capturing the actions on your screen that offers subscriptions. With a single tap, you can do the recording while gaming, on a meeting, online class, and other things happening on-screen. Besides its recording ability, you can also expect that the video you can export a video with 1080p, which means it is a UHD quality.

In addition to its recording ability, you can also do some basic annotations while recording and editing after the recording, which could become handy in times. Still, we can't hide that users encounter some problems while using the app. There are times that when you export the video recording, it says that it is corrupted. Also, many users complain that it automatically charges a subscription fee after the three-day free trial. To avoid this problem, it is canceling the subscription immediately before the free trial ends. 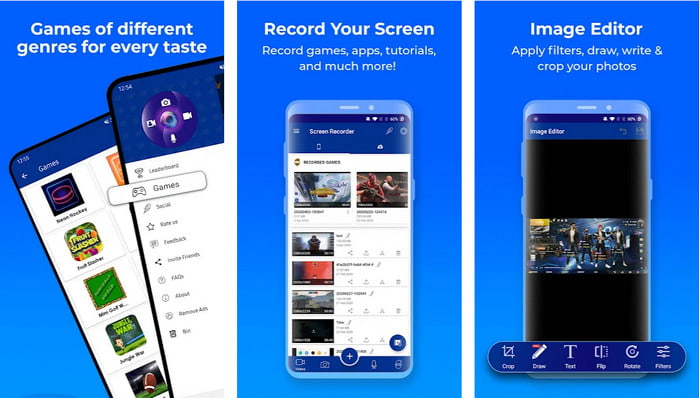 Like the three mentioned apps, you won't need an operating system of your phone to download and use this screen video recorder on Android. Screen Recorder – Livestream is a reliable on-screen recorder you might like to download on your phone because it is easy to use. With this app, you can do on-screen recording, audio, and Facecam without limitation as long as you have enough space. In addition to its recording, you can also use this app to do some basic editing such as crop, draw, add text, and others.

Whether you want to do an on-screen recording, this app can help you do it anytime and anywhere because you won't need an internet connection. Despite being a reliable recorder, there are still unskippable ads while using the tool, which irritates, especially while recording. So, if you want to remove the ads, you must purchase its product to remove it permanently. In addition to the ads problem, some users experience that the internal recording isn't saved when they do a mic and internal recording. Although some issues may occur with this app, it is still considered a reliable screen recorder you might want to download on your Android device. 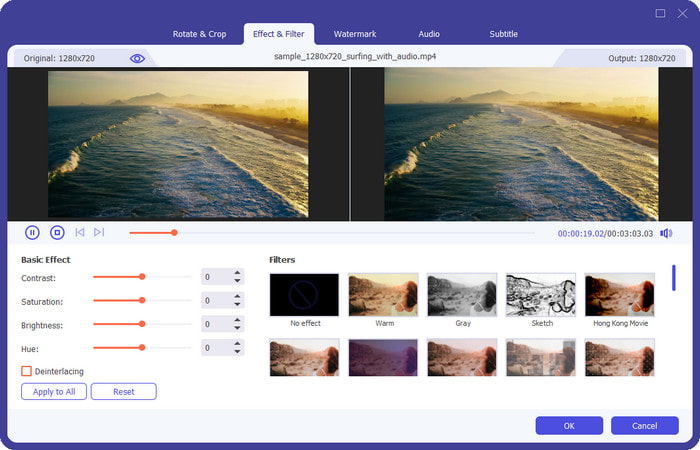 Now that we've finished reviewing the five Android 11 screen recorders, this part will tell you the secret software you can use to edit the recording you took on your Android. Even though most of the tool supports editing features, it is still not enough if you want to make an outstanding video recording. With FVC Video Converter Ultimate, you can use its ultimate editing features to make your recording look exceptional and better than the raw recording. Unlike the recorder that offers editing features, this tool supports professional editing you might like to use even you aren't an expert on editing the video.

Maybe you think what the editing features this tool can do are, then we will mention them right now for you to find out. First of all, if you need to cut, merge, crop, speed up, or slow down your recording, then this tool brings this all to you, and still, there's more. With its unique sets of effects and filters, you can make your recording look better before sharing them on the web. You can also correct the color, enhance the video, sync the audio and video, and more; basically, the tool is all-in-one. So if you want to use the full extent of this software, you must click the download button below.

Why does my recording automatically stop on Android?

There are two reasons why your recording stopped; the first reason is that the video recording app for Android you download can only record for a limited time. So, expect the recording to stop if you reach the time limit. To avoid this, you can purchase their premium version. Your storage is full, and screen recording will stop if your phone's storage exceeds the limit. You need to delete some files on your phone to free up some space to fix this.

Can I screen record with 4k resolution?

Yes, you can do a recording with 4k resolution. However, not all screen recorder supports this resolution. Even though 4k can provide you with an excellent resolution, the recording size will extend much more because the resolution is set to this. If you want to save some space up and have a high-definition recording, then 1080 is can give you a good resolution but not as good as the 4k but it is still manageable.

Why are ads popping up while recording?

Ads will pest your screen recording if you didn't subscribe to its premium version or purchase the no ads. To avoid pesky ads, you might need to purchase or subscribe to the app you are using. But if you don't want to spend any penny, you might like to use the Android built-in screen recorder for free.

We've acquired enough knowledge on the best screen recorder app for Android as we review them all for you. You may now choose which recorder fits your needs on your recording. Although they do the same job, they still have differences even a little bit. We hope that this article helps you figure out what to use; it would be nice to leave a comment if you have suggestions and recommendations. Thanks for reading this article!