> Resource > Video Editing >Slow Down a Video on Snapchat

One of the best filtering apps you can download for free on your device is Snapchat. Other than filters you can apply on video, users ask how to slow down a video on Snapchat to make a slow-motion effect on the video you take. With this app, you can shoot a slow-mo video to make it look impressive and unique compared to the other users using the same application. Want to know the secret on how to do it? No need to worry because we got your back.

This article will focus on the speed modifier you can use to maximize the video you want to slow-mo. So, what are you waiting for? Keep up the pace on reading this article to know more about the slow-down effects of Snapchat.

Part 1. How to Slow Down a Video on Snapchat Easily

How do you slow down a video on Snapchat? If you have the same question up until now, this step is for you because you can find the speed modifier on Snapchat. To get the result you want to have, below are the simplified steps to follow.

Step 1. Download Snapchat on your device and open it.

Step 2. Tap on your screen the photo icon and allow the app to have access to your library that has a photo on it. After you allow it, you must choose the video you want to slow down on the list that will show; tap it.

Step 3. After you've opened the video, tap Edit to use the speed modifier available on Snapchat.

Step 4. Swipe it to the left or right until you find the snail icon. This icon means the video speed will be slower than the original. Still, if the icon is in rabbit, it will preview the video fast. After that, save the video that is in slow-mo. 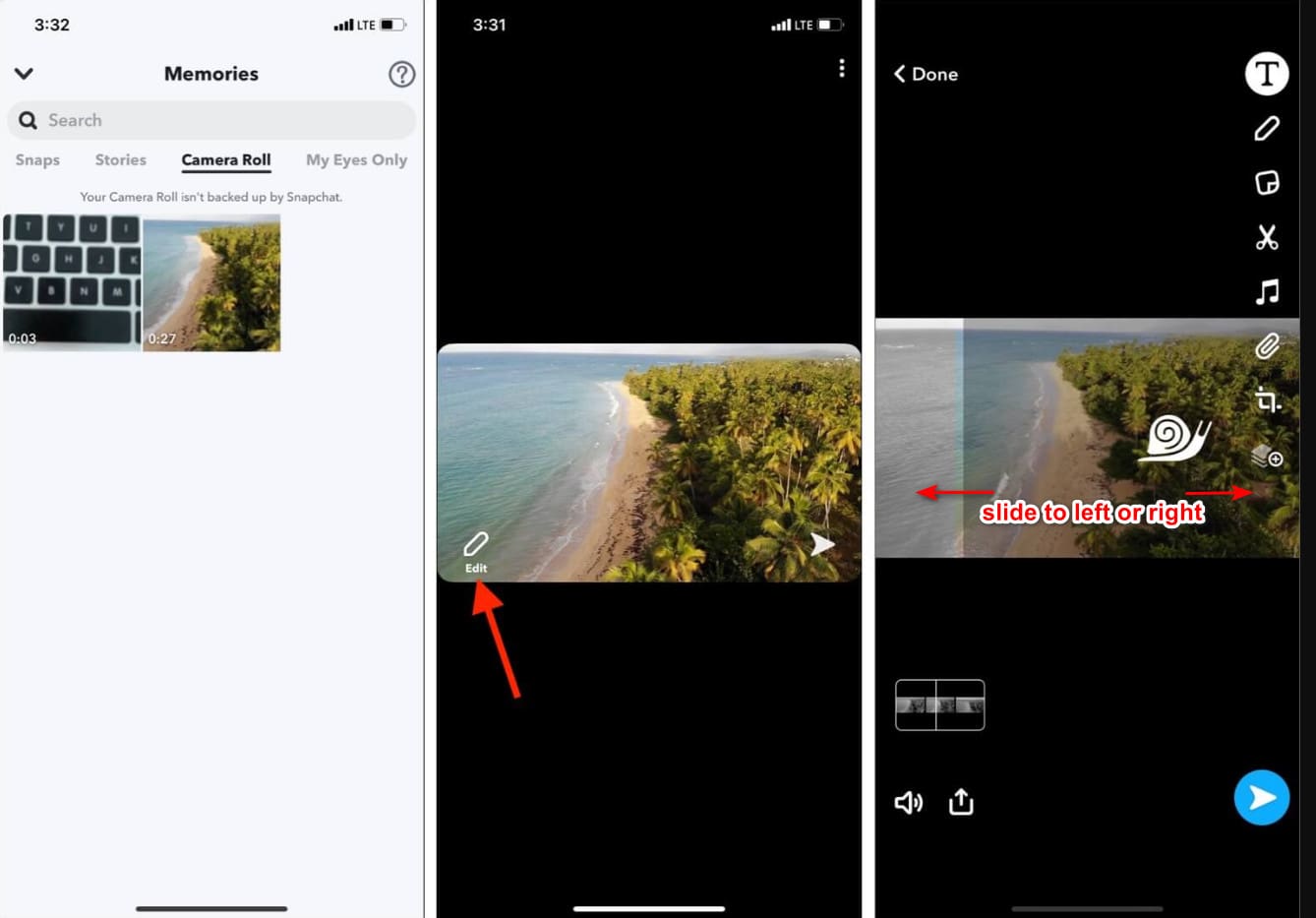 Although the app has an built-in speed modifier, the playback speed it supports is only a single motion. It means you don't have the option to change the slow-mo according to your preference, which is frustrating, especially if the slow-mo isn't what you want. But the next tool can help you change the playback slow motion speed according to your wants, and it will not give a single-speed motion like on Snapchat. To know this, you must read the following details in part 2.

Part 2. How to Put a Video in Slow Motion on Snapchat Effectively on Windows & Mac

As we introduce to you how to put a video in slow motion on Snapchat, you can see that the slow-motion it provides isn't as slow as the majority want. So, instead of relying on the built-in speed controller, which you can use on Snapchat, why don't you try using the FVC Video Converter Ultimate? Because it gives you the chance to change the video speed, you have it quickly according to your preferences. With the help of its speed controller, you can import a regular speed video here and turn it into a slow-mo video. You can have the video as slow as 0.75x, 0.5x, 0.25, or 0.125; choose either of the options and watch it on the sample preview to check if that is your preferred slow-mo speed.

In addition to its speed-up controller features, you can also use this software to add filters and effects like what you can have on Snapchat. Although it is supported, it isn't as wide as the filtering app you can have on your device. Also, you can do advanced editing here that you can't do on Snapchat. Such as volume booster, syncing audio, removing the watermark, adding metadata, and many more. Despite being an ultimate tool, the software isn't available on mobile devices. Still, you can download it on your Windows and Mac. So now, if you decide to use this tool, you can read and follow the tutorial to change the speed of the video.

Step 1. By clicking the download button presented below, you can have the ultimate speed changer on your Windows and Mac. Install the software promptly, and launch it to change the playback speed of your video.

Step 2. You will see four different sections on the interface that you can use; click Toolbox and look for the Video Speed Controller on the included list. 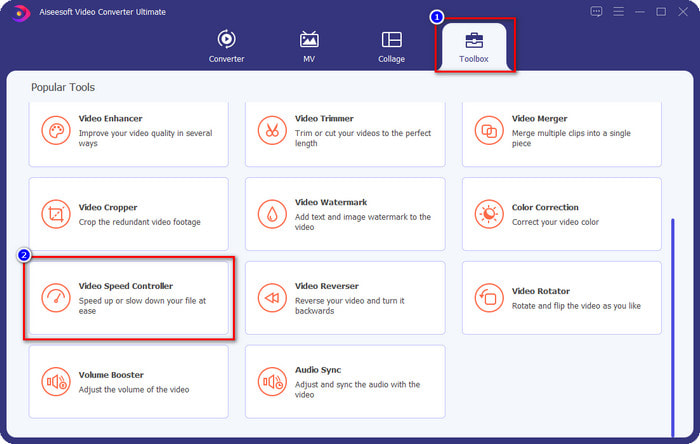 Step 3. Press the + button to open the folder, upload the Snapchat video or any video you want to slow-mo, and click Open. 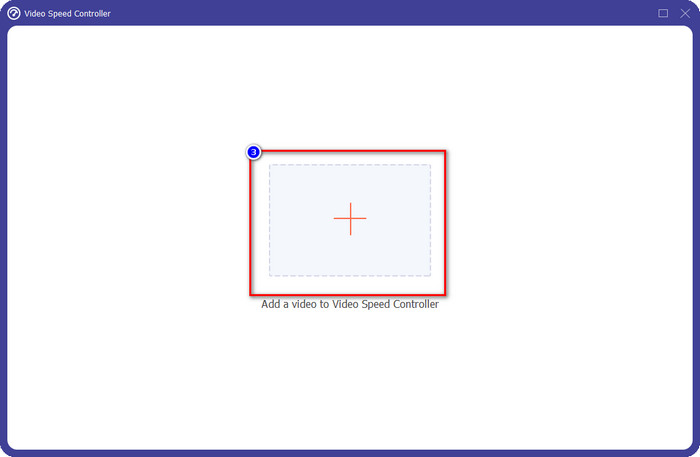 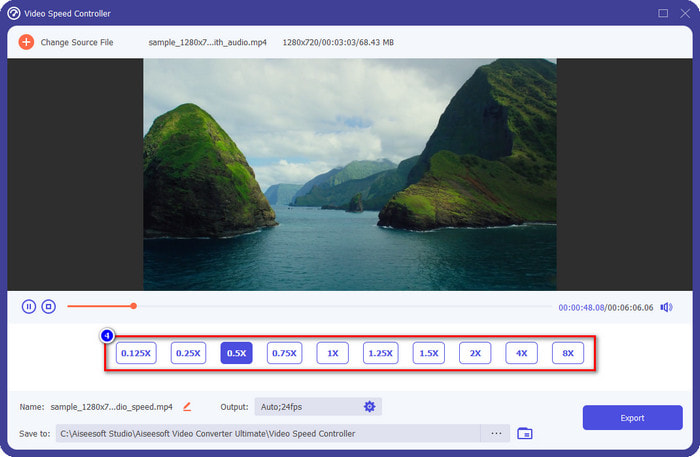 Optional: If you want to do an advanced output change, you can click the Output. This section allows you to change the format, resolution, framerate, quality, zoom mode, etc.; click OK to apply the changes you've added. 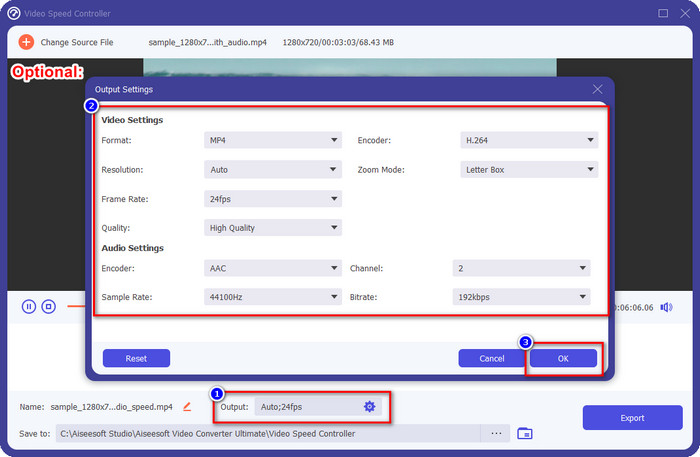 Step 5. Click the Export button if you are ready to convert the video's playback speed. You will now have the video on a slow-mo; you can now share the video or use the slow-mo video you've exported here. 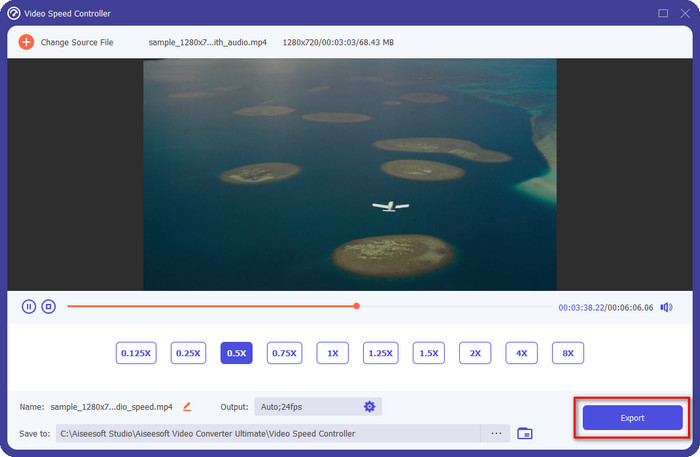 How to Slow down MP4 Files

Part 3. FAQs on How to Slow Down a Video on Snapchat

Does export slow-mo video on Snapchat will have a watermark?

You can freely export the video you've slow-mo on Snapchat without the watermark of the final output. Even though you want to add one, you aren't allowed to add a Snapchat watermark on the video.

Can I change the speed of the video even if I didn't take it on Snapchat?

You can, but if you only allowed it, because if you didn't allow the app to have access to your Gallery or Photos, you can't change the speed of the video you want. To see the video you didn't take on Snapchat, you can go to the Camera Roll instead of the Snaps and Stories.

Are there any limitations on slowing down a video on Snapchat?

Do you need a helping hand to teach you how to slow down a video on Snapchat? You already get the help you need by reading this article. Suppose you still think that the Snapchat built-in speed controller isn't enough for your need. In that case, you must use a video speed controller, like FVC Video Converter Ultimate, to have full control over the speed of the video. You can drop us a message if you have a question about it so that we can help you and let's solve the problem together.