For aspirant vloggers, a speed-up video app can become handy when you want to make an opening of the video you take or cutscene. With this effect, you can easily exhibit all the information you want the watcher to know quickly. Although speeding up video is an easy task, some apps aren’t reliable. Most of the time, they decrease the video quality, and it becomes blurry instead of having a speed-up video. So in today’s article, we will provide you with the best apps you must have to make your video double the playback speed or more without quality loss. With these editors on the list, this problem is solved. To learn more about the different apps we include available on different devices you must keep reading this article.

Part 1. Top 2 Apps to Speed Up Video on iOS Devices for Free

You can quickly learn how to speed up the video in the iMovie app for free and efficiently. This built-in editor on Mac is also downloadable on any iOS device, whether you are using an iPhone or iPod. Most iOS users depend on this tool because of the editing features. It is like a semi-weighted editor you can have on your phone for free. Although the version of the Mac has a lot to offer, the version it provides on iOS is undeniably beautiful and great if we were about to compare it with the other converters.

With it, you have the option to tune the speed of the whole video or a particular section only by dividing them into ranges. For instance, if you want to speed up 2x times the section in this part, you can set it, then change the speed of the other part according to your wants. Despite being a great speed-up controller app, the fastest speed it can go is 2x on every iOS device. Also, the preview box on where you can watch the speed-up video is a bit small compared to the other speed-up video app. Nevertheless, this app is reliable and great for speeding up the video. 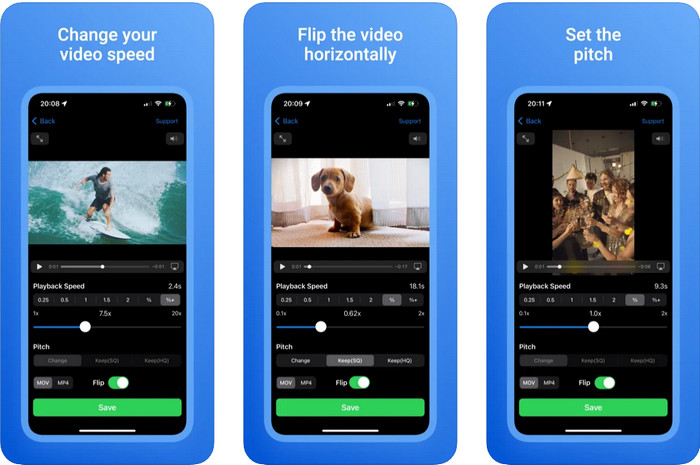 Despite its functionality as an app to speed up video on iPhone, the free version is minimal. It has pop-up ads that keep showing while you are using it. After you’ve installed the app on your device, you will be asked if you want to allow the app to trace the activity you do and send you the ads that will suit you. But you can decline the offer of tracing the activities to avoid privacy leakage. Overall, we can see that the app is great for speeding up video on iOS devices.

Part 2. Top 2 Apps to Speed Up Video on Any Android Devices Cost-Free 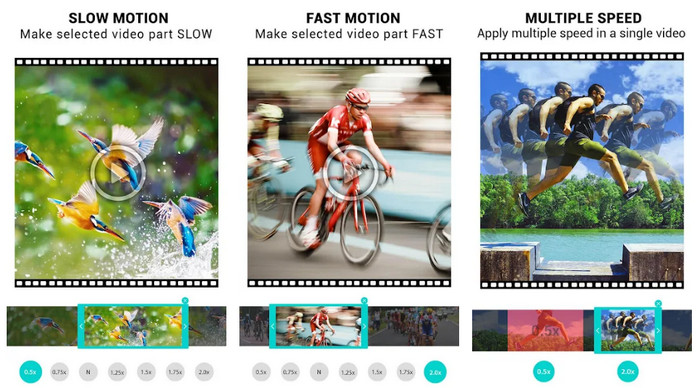 Video Speed Changer: SlowMo FastMo is a speed-up video app on Android that offers in-app purchases. Same as the iMovie, you apply multiple different playback speeds to the video you have instead of speeding up the whole video section. The playback option it offers is no different from the app we mentioned on iOS because it also supports 2x speed-up at maximum. You can watch the preview before converting the playback speed on the video to ensure that it is the speed you prefer.

Although the app offers to change the speed per section, some problems may occur while using it. Most users encounter that the video they altered the speed freezes when the speed-up is applied. However, instances like this might occur on the other app we mention in this article. So, if you want to change the speed of the video you have on Android, then there is no doubt that this tool can help you with this task. 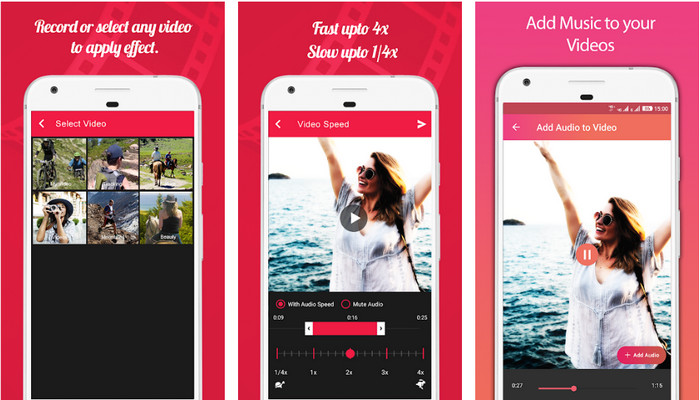 Video Speed: Fast Video and Slow Video Motion allow you to have a free app to speed up video on Android easily. Its GUI isn’t as complicated as the iMovie, but it offers fewer options than the other speed converter on phones. Even though the app is free, the playback speed option it supports is much wider than the other speed controller on mobile devices. For it supports 2x, 3x, and 4x in the maximum.

Overall, the app works what it said, speeds up and slows down the video. However, the output file you speed up here became bigger than the original video file size. Also, while you are in the process of exporting the video, you aren’t able to close the app because it will interrupt the conversion process. But the experience while using it is far better than and simpler, especially for those who love to do a quick speed on their Android. 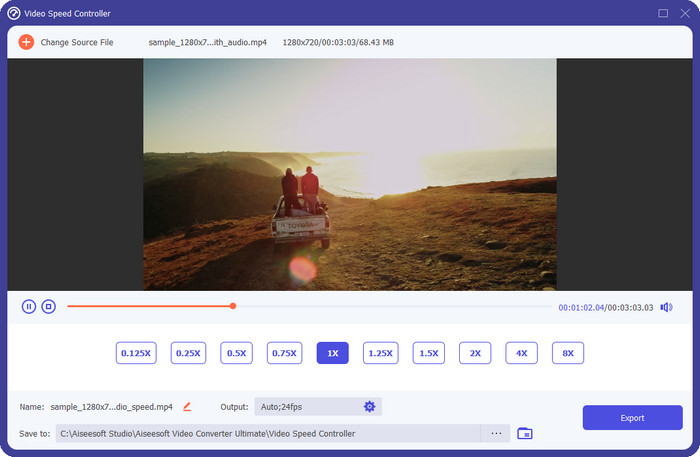 FVC Video Converter Ultimate is the best app to speed up video on Windows and Mac without degrading the quality you’ve uploaded. Unlike the app you can have on your mobile device, you can speed up the video you’ve imported up to 8x faster with this ultimate software. After selecting the speed on the list, you can convert the speed in less than a minute. This tool can speed up your video, but it also has an ultra-fast converting process to help you not wait for the process to end.

In addition to its playback speed changer, this software also has a lot to offer; you can find all the ultimate features and functions on Toolbox. With this tool, you can change the FPS of the video you are speeding up to make it smoother when you export it. So, if you want to download this software on your desktop, kindly click the download button below, and install it promptly. Open it to speed up the video you want with the help of the ultimate software.

Does speeding up videos will become bigger?

In terms of file size, speeding up a video can help you make the file size smaller because the duration of the video is shortened. After all, you speed up. Although the size will not change drastically, you can still see the difference between the file size of each file you speed up and not.

What is the playback speed I should choose to speed up?

The safest playback speed you must choose when you are about to speed up is 2x, so if you extend the speed more than 2x expect that it will become faster, and sometimes it plays not so smooth. But if you want to speed up a video with a smooth more quickly than 2x, then use the FVC Video Converter Ultimate.

Why did the format of the video I speed up change?

Because the output format extension set isn’t the same as the video file, you have. So, if you want to retain the format, you must select the same extension that your video has.

Even you are an aspirant vlogger or not, using a speed-up video app can become handy when you need to change the playback speed of the video. Whether by part or not, the application we mention in this write-up can effectively help you accomplish the task quickly. So, if you want to change the speed on Android or iOS, the apps we review are absolute. But if you are Windows and a Mac user, you must use the FVC Video Converter Ultimate. Do you want to know why? Well, if you download the software on your desktop, you will know why we introduce this as the best speed controller app.