> Resource > Convert MTS >What Is An MTS File

You will get a recorded video in MTS format if you are using a Sony or Panasonic camcorder. Actually you won’t notice it until you can’t play the MTS file with your media player or device. Here comes the question, what is an MTS file?

Now in many fields and electronic products, there is higher and higher requirement of image quality for the video procession. MTS is a high-definition transport stream video format which can offer high-quality visual experience.

However, MTS is not a popular file format. Many frequently-used media players and portable iOS/Android devices can’t play the MTS file directly. Considering that, here in this post, we like to give you a detailed introduction of MTS format. What’s more, we will show you 3 easy ways to convert and play MTS files.

MTS is the file extension of AVCHD (Advanced Video Coding High Definition) which mainly used by Sony and Panasonic HD camcorders. It is developed jointly by Sony and Panasonic and specially designed for the high definition digital videos. MTS is a high-definition MPEG and H.264 transport stream video format and it highly supports 720p and 1080i HD. So comparing with other format, MTS file can offers a higher video quality.

MTS is the file extension of AVCHD video on digital camcorder. When you import an MTS file to your computer, the file extension will automatically turn to M2TS. MTS is also widely used for Blu-ray Disc Audio-Video (BDAV). It has the capability to carry various video, audio and other streams.

MTS file can provide a high quality video with a relatively small file size. But as it mentioned above, MTS can’t be supported by many media players, video editors, computers and mobile devices. You can easily get an MTS playing error due to the incompatibility. Because of that, there are lots of people searching on the internet about MTS player, how to play an MTS file, and how to convert MTS to MP4 and so on.

Compared with MTS, MP4 can be easily played by almost all media players, video editing tools and devices. MP4 is the most popular digital multimedia container format for storing video. MP4 is also able to carry audio and text.

MP4 is compatible with Windows 10/8/7/XP/Vista PC, Mac, editing software, media players, iOS/Android devices like iPhone, iPad, iPod touch, Android phone, Windows phone, and more. MP4 can offer a high video quality while keeping a suitable file size. So when you get an unsupported format like MTS, you can choose to convert it to MP4 for better playback.

Part 2. How to Free Convert MTS to MP4 Online

When you want to share the recorded MTS video to YouTube, Facebook or other platforms, or you want to edit and view it on your device, you may need to convert MTS to MP4. Fortunately, there are a lot of MTS video converters including some free online ones can help you make the MTS file conversion. Here at this part, we will introduce you with a popular free online video converter, FVC Free Online Video Converter to convert your MTS file.

Step 1. First, you can open your browser and navigate to the official site of FVC Free Online Video Converter. Here you can directly go to https://www.free-videoconverter.net/free-online-video-converter/. Then, click the Add Files to Convert button to download and install the launcher

Step 2. When the launcher is activated, upload the MTS file you want to convert to MP4. Then click the Convert button to start the video conversion from MTS to MP4. 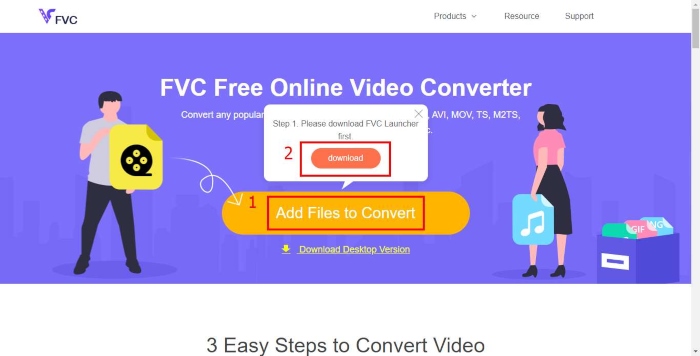 With the free online video converter above, you can handily make the video conversion from MTS to MP4. If you pay more attention to the output MP4 quality, you should give the Free MTS Converter a try. It allows you to convert MTS to MP4 without any image or sound quality loss.

Step 1. Double click on the download button above and then follow the on-screen instructions to quickly install and run this free MTS to MP4 converter on your computer.

Step 2. When you enter the first window of this MTS video converter, click Add File(s) to load the MTS file you want to convert. During this step, you are allowed to add one or more files based on your need. 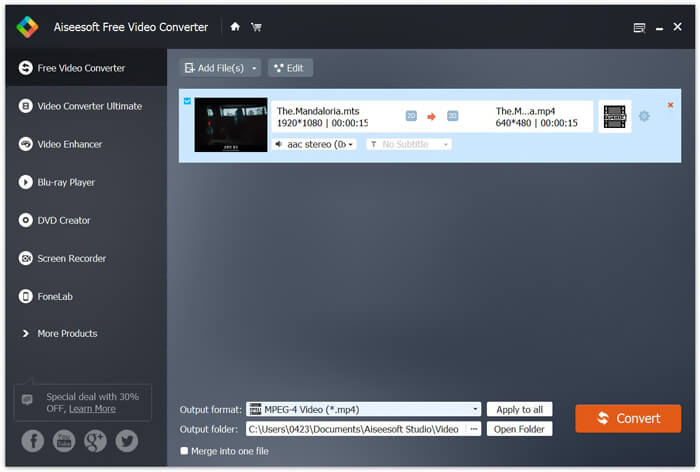 Step 3. Click Output format and then choose MP4 as the target format. Here you can also select a suitable destination file folder for the converted video by clicking the Output folder option. After that, click the Convert button to begin the free video conversion from MTS to MP4. 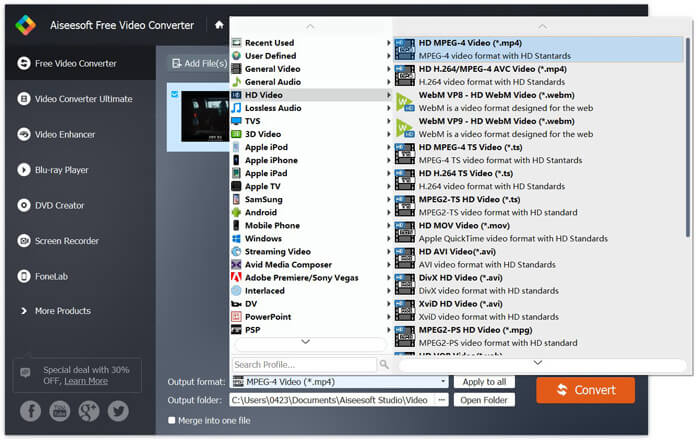 Free Video Converter is designed with the latest accelerate technology which guarantees you a really fast MTS/M2TS to MP4 converting speed. Moreover, it also offers some basic editing features for you to custom video before the final conversion. You should free download it and have a try.

Part 4. How to Free Convert and Play an MTS File with VLC Player

If you have the VLC Media Player installed on your computer, you can rely on it to free convert an MTS file to MP4, MOV, FLV, and more for better uploading or playing. In fact, as an open-source media player, VLC Player enables you to directly enjoy MTS file with great visual experience. Here in this part, we like to show you how to play and convert an MTS file on VLC player.

Step 1. First, you need to ensure you have a VLC Player on your computer. Then open this media player for playback of MTS file.

Step 2. Click Media > Open File to load the MTS file you want to play. After loading, VLC Player will automatically play the MTS file for you.

Here you should know that, not all MTS files can be viewed with good effects on VLC Player.

In some cases, you are more likely get a MTS playing error. You have to add some extensions to make the VLC Player support your MTS file. For instance, you need a library for AACS decoding to play an MTS file.

In fact, when you get the MTS file playing error, you can choose to convert your MTS to a popular video format like MP4, MOV, FLV, and AVI and so on. After that, you can easily watch the MTS file on any devices with ease.

Step 1. Open VLC Player on your computer. Click Media > Convert/Save to arise the pop-up window of Open Media. Here you can click Add to import the MTS file you want to convert.

Step 2. After importing, click the Convert Save to open the Convert window. Click Profile and then choose MP4 as the target format. During this step, you are allowed to select a suitable destination file folder for the output video by clicking the Browse option. 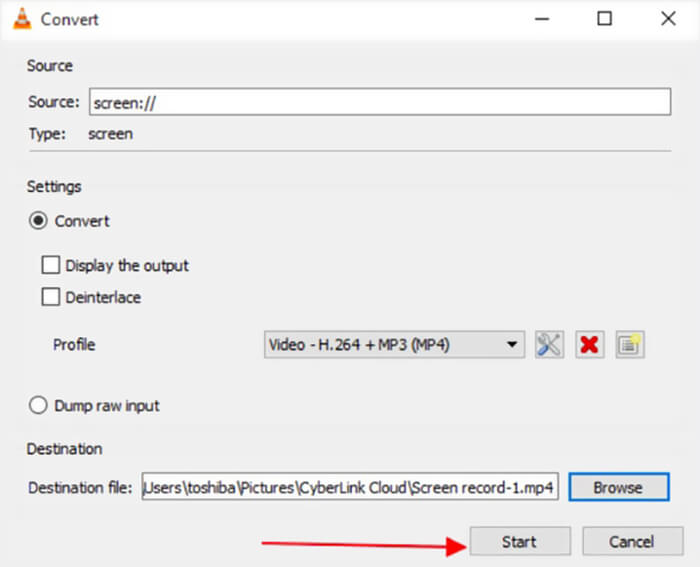 Step 3. VLC Player provides you with some basic editing features. Before the final MTS file conversion, you can custom the video effects according to your need. Then you can click Start to begin the free video conversion of MTS file.

After reading this page, you can get a clear understanding of the MTS file. In addition, you can learn how to convert and play an MTS file. Leave us a message if you still have any questions about the MTS format.