I get an ARF file sent by my colleague with the meeting recording on Mac, and I want to convert it to MP4 because I want to play it on my Android phone. However, I did not see a way to convert ARF to MP4. Any help would be much appreciated.

An AFR file (Advanced Recording Format) is a recording file generated by Cisco WebEx. The ARF file can be shared via a link and opened directly. Alternatively, the ARF file can be downloaded to your local computer and played with the Webex Network Recording Player.

Yes, you may have found something that the ARF file is not as popular as MP4, and can be opened by nothing except for WebEx Player.

To open the ARF files easily, you need to convert ARF to MP4. That’s what we shall show in this page in 2 free ways.

Part 1. How to Free Convert ARF to MP4 on Windows Computer

Cisco WebEx has introduced the official way to help you change ARF to MP4. Nothing is required but download the Webex Network Recording Player.

Webex Network Recording Player is the software to convert the ARF files into MP4, WMV and SWF videos on Windows computer.

The detailed steps are as follows:

Make sure you have downloaded the ARF recording files from the host account.

Step 1. Open the Network Recording Player and go to the File menu to select Open to locate and open the ARF recording file.

Step 3. In the Save as dialog box, specify where you want to save the converted MP4 files and customize the video quality, codec, etc.

Then it will start converting ARF file immediately or at a scheduled time as you wish. 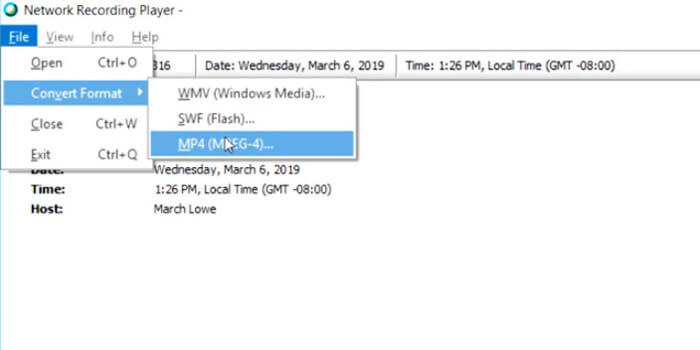 That’s all. Then you can open the MP4 files with your MP4 player easily.

It is easy to convert ARF to MP4 on Windows computers. However, there are some drawbacks you should notice:

Part 2. How to Free Save ARF to MP4 on Mac/PC Online

It is easy to play an ARF file on Mac, but cannot convert ARF files. To convert the ARF videos on Mac, you will need third-party software. The mainstream video converters like HandBrake, VLC, FFmpeg, etc., do not support ARF conversion. To export ARF as MP4, you can take the recording way.

Free Screen Recorder is the online screen capture software on Windows and Mac, which can record anything that is playing on your computer, including the videos, and audio.

To save your ARF recording file as MP4 on Mac or WMV on Windows, you just use the free screen capture software to record the video file while it is playing on Mac.

Step 1. Visit the free ARF recorder online, click Start Recording, and then you are prompted to download the recorder launcher.

Step 2. In the launcher window after the successful installation, you should move the frame border to adjust the recording region to load the whole ARF file playing window. Enable Speaker to record the sound of the ARF file.

The other 2 options, Microphone, and Camera are optional for you.

Step 3. Click the REC button while playing the ARF file with Network-Recording Player on Mac to start recording. 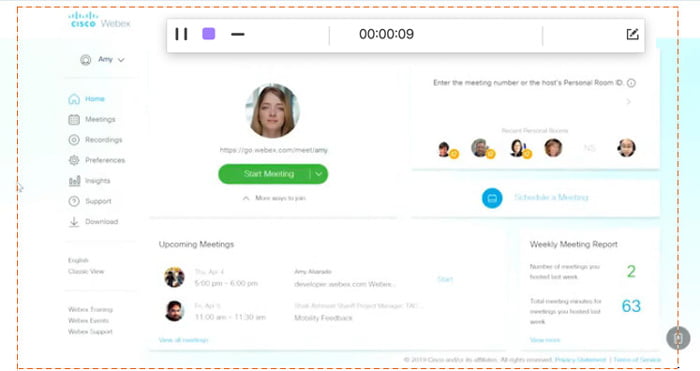 In this way, even if you open the ARF file via a sharing link, you can easily save it as MP4 file.

How long does it take to convert ARF to MP4?

The time you convert ARF to MP4 depends on the recording file size and length. According to our test, the time you spent on converting ARF to MP4 on Windows is longer than that on recording on Mac.

What are the differences between ARF and WRF?

What opens an ARF file?

If you receive an email with a link to a WebEx recording, just click on the link to open it. If you've downloaded a file, get the Webex Player to open the ARF files. Alternatively, you can convert ARF to MP4 to play it conveniently.

When you get An ARF file, it is easy to open directly. However, if you download an ARF file, it becomes more complicated to play it on your non-WebEx player. This page shares 2 ways to convert ARF to MP4 on PC and Mac, so that you can use the ARF file universally.

Do you meet any problems when converting ARF to MP4?

Any other ways of turning ARF to MP4?