How to Free Convert MP4 to MPEG

Though both MP4 and MPEG are the digital video compression standards, they work differently. MPEG mainly refers to MPEG-1 and MPEG-2, which are widely used in VCD, DVD, digital/satellite TV and SVCD, while MP4 is commonly used in streaming service, iTunes Store, mobile phones, Blu-ray, etc. When you want to create a CD or DVD from MP4 videos, the first thing you have to convert MP4 to MPEG.

To do convert MP4 to MPEG, no special tech knowledge is required. The process starts with MP4 to MPEG converter.

That’s what we shall uncover, top 4 MP4 to MPEG converter online and for desktop computer with the detailed guide.

Things get tricky when you want to burn MP4 videos into VCD or DVD, but Free Video Converter will make it easy.

Here’s how to get started.

Download the free MP4 to MPEG converter from the above download link. Open this software after the on-screen instructions to install.

In the main interface, click Add File(s) to add the MP4 files. This software also support batch conversion and you are allowed to add batch MP4 files. 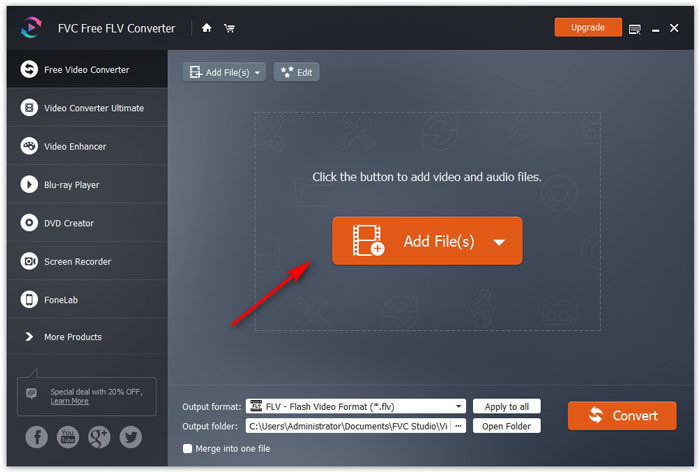 Click the drop-down option of Output format, then you can scroll down to find all the supported formats by this software. Input MPEG-1 or MPEG-2 in the search bar to find the MPEG format you need with the filename extension of .mpg. 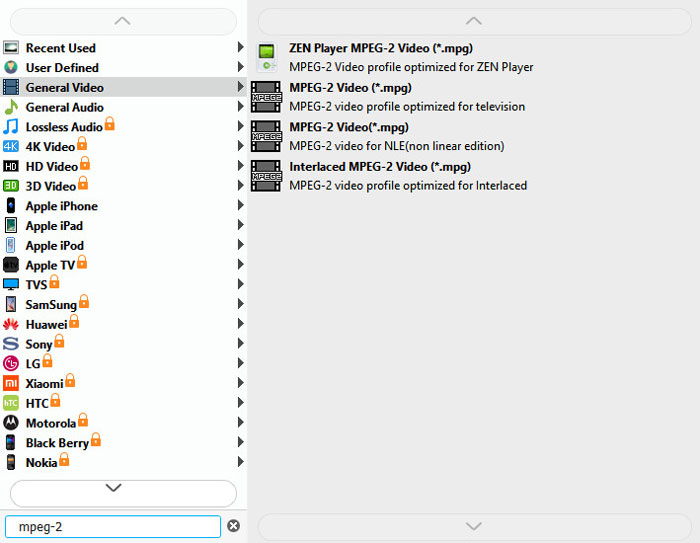 After picking up the MPEG output format, the settings icon next the output enables you to adjust the video resolution, codec, bitrate, sample rate, etc. 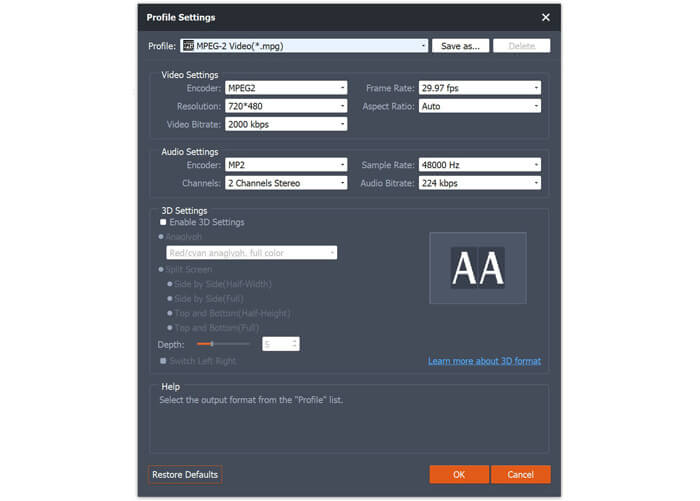 When all the things are made well, just click Convert button at the bottom-right corner to start changing MP4 to MPEG. 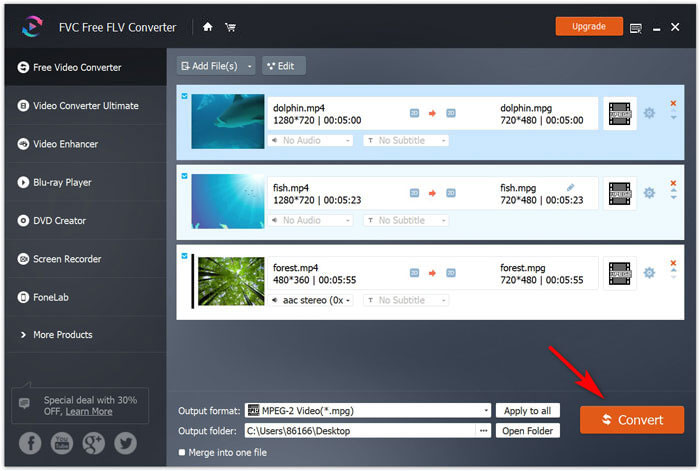 Before conversion, the Edit button in the main interface makes you add the opening and ending theme for the output MPEG videos.

The added bonus of this software is that you can convert MPEG, WMV, AVI, SWF, etc., to MP4 when you need to play videos on most devices.

We tried out more than 30 online MP4 to MPEG converting apps, and have come up with this top-3 list.

Convertio is the free online MP4 to MPEG converter. It lets you convert MP4 files from local computer and the URL into MPEG. Batch conversion is also supported to save your time. The steps of converting MP4 to MPEG is also easy by uploading files and converting and downloading. You can download the converted MPEG files or copy and paste the URL for later downloading.

ONLINE-CONVERT.COM is another free online site to change MP4 to MPEG. Similar to Convertio, it lets you convert MP4 to MPEG from local hard drive or pasting URL directly. In addition, it offers more customized controls to adjust the MPEG file before converting, like ratio, screen size, channel, quality, etc. Apart from that, it offers the simple editing tools like rotate, cut, crop and more features. 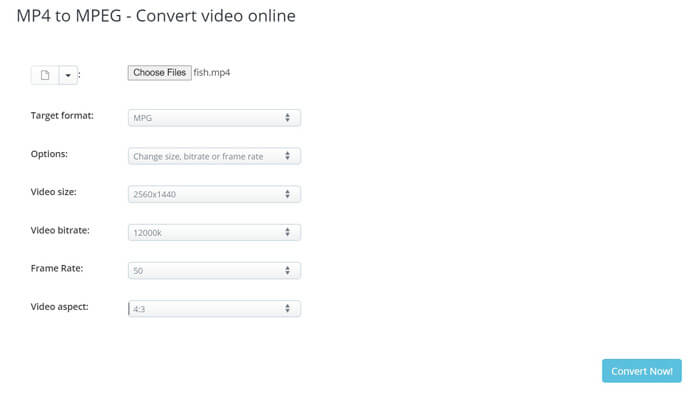 ACONVERT.COM is also the free MP4 to MPG converter. It is the simple converting software to turn MP4 to MPEG by uploading your local files or pasting the URL. This software also offers other editing tools like cut, merge, rotate, crop, etc., to help you further edit the video effects.

Whether you’re a tech pro or one of the not-so-tech-savvy types, the steps of converting MP4 to MPEG online are similar.

Now, let’s take Convertio as an example to show the steps.

Step 1. Visit this online MP4 to MPEG converter via your computer browser, click Choose Files and a dialog opens where you need to select and upload the MP4 files.

Alternatively, you are allowed to click the other options to add MP4 files from Dropbox, Google Drive or URL.

Step 2. Select MPG from the drop-down option, and click Convert button and this online converter will start uploading the MP4 files and converting them.

If you would like, click the gear icon to adjust the video codec, quality, frame rate, etc.

Step 3. After the conversion is done, just click the Download button to save them on your computer.

The free online MP4 to MPEG converter contain many ads and you should pay attention to use them.

MPEG, short for Moving Picture Experts Group, is the working group to set the standards for audio and video compression and transmission. The MPEG standards consist of different parts and each part covers a certain aspect of the whole specification. MPEG-1, MPEG-2, MPEG-3 (merged with MPEG-2) and MPEG-4 are the main parts from MPEG.

MP4, also named as MPEG-4 Part 14, is the digital multimedia container format to store video, audio, images and subtitles. It is based on the QuickTime File Format to support MPEG-4 video and audio codecs.

Let’s get an intensive knowledge of MP4 VS MPEG from the table below.

No. MP4 is an abbreviated term for MPEG-4 part 14, which is one of the MPEG-4 compression algorithms. Still there are different videos using other MPEG-4 compression parts. .m4p are iTunes DRM audio, .m4a and m4b are iTunes audiobooks and podcasts, .m4r is used for iPhone ringtones, .3gp is for mobile phones and more.

Does VLC convert MP4 to MPEG?

Yes. VLC is not only the media player to paly MP4 files, it can be also the MP4 converter to change MP4 to FLV, MPEG-1, MPEG-TS, and MPEG-PS. But only VLC desktop version can work as the converter. Android or iOS device cannot make it.

Does online MP4 to MPEG converter have a watermark?

Yes. The top 3 free MP4 to MPEG converters attach the watermark into the converted MPEG files. For converting MP4 to MPEG without watermark, you should use the desktop Free Online Video Converter.

Which method is your favorite one?