As HEIC emerges on the market, Apple uses this opportunity to use the format because it has a lot of advantages over the JPEG, which they are using by default. Due to the benefits it brings to the table; Android also tried to adapt the format on every Google's Android Pie or Android version 9 natively. Without downloading an additional codec to open the image. Yet, not all of us still use Google's Android Pie because there are newer versions arrived on every Android device.

Essentially, we will need a viewer and converter to open the HEIC file on our Android devices by default. We will give you the best apps to view and convert HEIC files on Android in less than a minute by reading this write-up to make it less troublesome.

Earlier, we explained that Android supports HEIC if you still use version 9 or Google's Android Pie. Its first preview was on March 7, 2018, and its first release was on August 6, 2018. Most popular Android devices, mainly the Google Pixels, also used this version because of the updated features and functions. This version is widely known as Android Pie or Android P; it is the ninth major release and the 16th version on Android. With its rise, Android users became impressed because of the update. It receives a redesigned on-screen navigation, the existing app menu, gesture bar, horizontal overview, and, more importantly, the HEIC file's support.

Despite the rise of version 9, there are some significant fallbacks regarding this version, such as the smart selection, command split-screen, gesture navigation, screen capture, privacy, and more. And because of these reasons, Android updated the version to 10, and later it became 12; sooner, we will receive an update for a newer version. The HEIC file became unsupported on the updated version even after the day with the updated version. So, if you are asking if Android supports HEIC on the newer version, the answer is no. Even though version 9 doesn't get an update, it is still pretty old. You can still manage to use it even if the version isn't the latest.

Suppose the version of your Android isn't 9, then what should you do to view the HEIC file? Because you can't open the HEIC file on your Android newer version natively. Then the succeeding details will give you the best remedy to this problem by downloading and using a viewer and converter for Android. To know more about it, you must continue reading this part.

1st Solution. Use a HEIC Viewer on Android 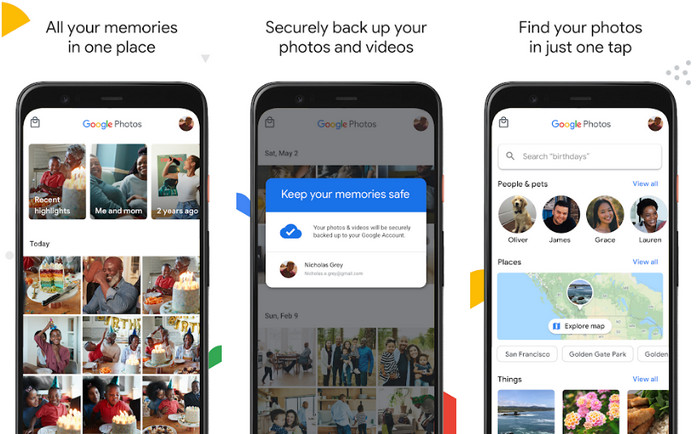 Remember to update the Google Photo because you would have trouble opening the HEIC file if it isn't. After the update, you can proceed to the steps we include below.

Step 1. If the application isn't pre-installed on your Android OS, you must download the app on the Play Store by typing its name on the search bar, then downloading it. But if the app is already on your device, then open it.

Step 2. Allow the app to access your library to show you the images stored in your Gallery.

Step 3. Tap the HEIC image you want to view, and you can now view the image in a full display.

2nd Solution. Use a HEIC Converter on Android to Convert HEIC to Other Formats

Although Google Photos can view the HEIC file on Android, you aren't allowed to edit the photo in this app because editing features aren't supported on the HEIC file. But you can convert the HEIC file into JPEG to make it compatible to edit in Google Photo or the photo editor of your choice. Luckily, you can use the FVC Free HEIC to JPG Converter to change the HEIC file you have into a JPEG to be able to edit it. Instead of downloading an app, you can use your browser to utilize the converter for free on the web. By following the steps below, you can easily change the HEIC format and then edit them on the editor you want to use.

Step 1. Tap this link to open the online converter on your Android device.

Step 2. After it loads up, click the + Add HEIC/HEIF File(s), locate the HEIC file on the folder that will show on your display, and tap OK to upload it. 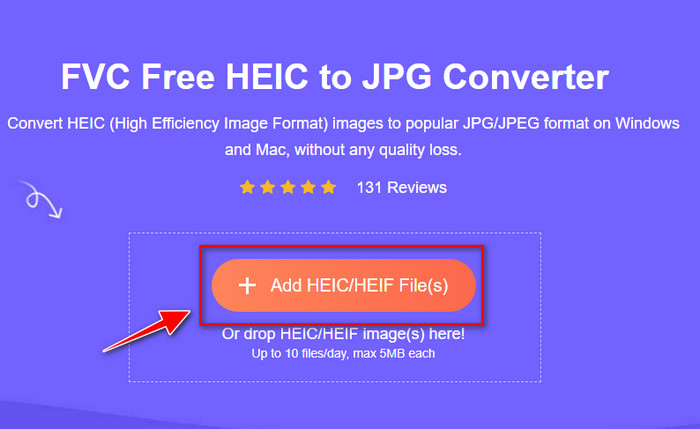 Step 3. Wait for the converting process; if you see that the conversion is finished, click the Download to save it on your drive. There is no need to worry because it won't charge your account after you convert. After all, the web tool is free to use on any Android version. Now you can upload the image to the editor to edit it according to your wants.

Part 3. FAQs about the HEIC File on Android

Can I take a snap in the format of HEIC on Android?

Unfortunately, you can't take a snap in the format of HEIC on Android because it is unsupported. But sooner, Android might add support on the HEIC file again to take a shot in this format which could save you a lot of storage than the JPEG or PNG.

Why can't I open the HEIC image on Gallery?

Because of compatibility, the Gallery that Android supports can only view JPG and PNG. Suppose you download an image in another format. In that case, you will receive a dialogue box saying that it is unsupported or corrupted.

Does converting the HEIC to JPG lose its quality?

After you convert HEIC to JPG, you wouldn't see a noticeable difference between the two images. But the HEIC has a more in-depth color than the JPG, so if you focus, you will see that the color depth change, but overall, it won't lose quality.

This article provides you with the best ways to convert and view the HEIC file on Android. But if you still use Android Pie, you wouldn't need to convert the HEIC file or download a viewer on your Android because version 9 supports HEIC files natively. And if not, you must read the details we include in part two as we give you the best solution for viewing and converting the format on your Android at ease. It is now solved, and we now can open the HEIC file that we received and downloaded on our Android phones for free.