Want to convert MTS files to FLV? The videos recorded with AVCHD camcorders are usually stored in MTS or M2TS format. MTS files are not commonly supported by some media players, nor are they uploaded to YouTube or Facebook. If you have an AVCHD camcorder like Sony, Panasonic or Cannon, you may want to convert the recorded MTS videos to flash video format. So they can play on most media players. That's why you should read on our post, for we shall provide 3 methods to convert the MTS files to FLV on Windows and Mac.

Part 1. Professional Way to Convert MTS to FLV for Free

To convert your MTS file to flash video for uploading, you need a professional tool like FVC Free MTS Converter. It is an MTS to FLV converter that can batch convert MTS files to FLV, MP4, WMV, MOV and other video and audio formats. With the built-in video editing tools, you can edit the MTS files before converting.

Free download, install and launch FVC Free MTS Converter. Click Add File(s) button to import your MTS file. You can also drag more than one MTS file into the program for free. 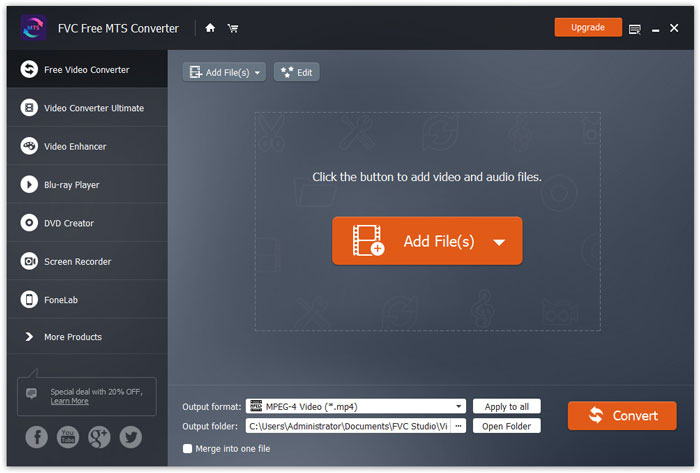 Click the Edit button to start editing your MTS file. You can select a certain theme, edit the title, author, time at the opening and ending. 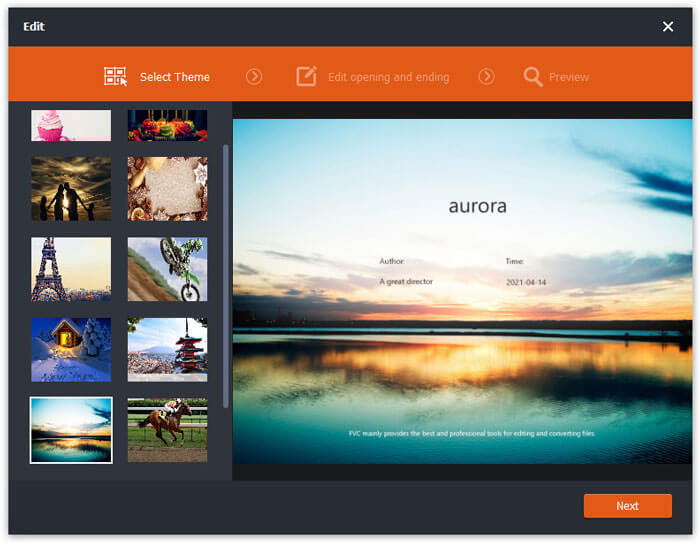 Then go to the Output format area and choose General Video category. Find FLV - Flash Video Format (.flv) and set it as the output format. This format is a widely used network video streaming media format. 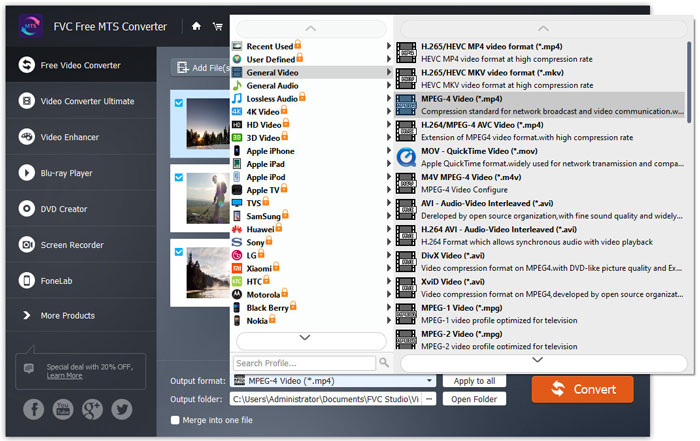 Finally, go to the Output folder area and choose the destination where the converted FLV file will be saved. You can click the Convert button to start converting MTS to FLV file for free.

After that, you can upload the converted FLV file to YouTube, Vimeo, Facebook, Google video, or other media platforms. 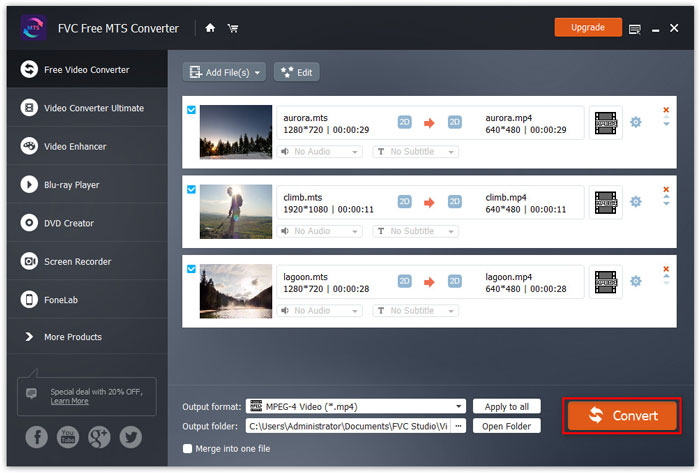 Part 2. How to Change MTS to FLV Free Online

If you want to find an online tool without downloading any software, you can come to FVC Free Online Video Converter. It is an easy-to-use and free online MTS to FLV converter that helps convert any popular video/audio formats like MTS to FLV, MP4, WMV, AVI, MOV, MP3, etc., totally free on Windows and Mac. You can check the detailed steps to change MTS to FLV with this free online tool.

Step 2. Select your MTS files to convert from your computer.

Step 3. Set FLV as the output format at the bottom. If you want to adjust more settings, you can click the gear icon to adjust video encoder, resolution, frame rate, bitrate and other audio settings like audio encoder, channel, sample rate and bitrate. 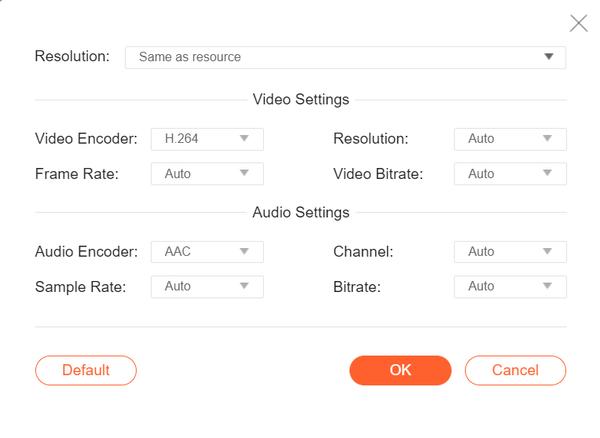 Step 4. Click the Covert button to start converting your MTS file to FLV. 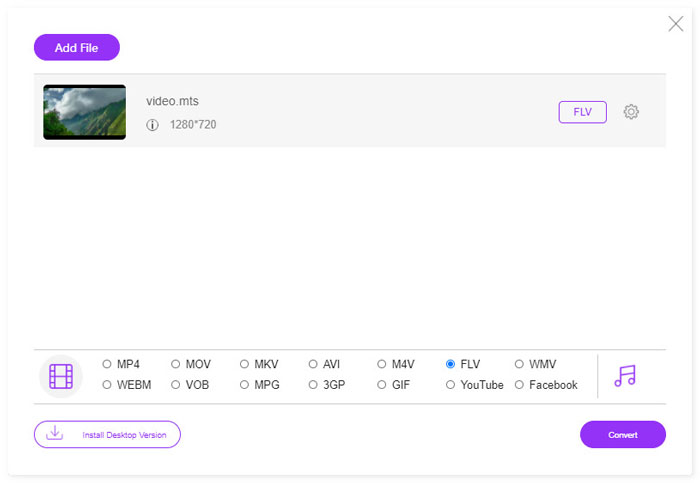 VLC Media Player is not only a simple video/audio player, but also a video converter that packed with useful features. It works as a good MTS to FLV converter that handles a wide range of supported files for conversion. It is totally free without any limitations. With VLC, you can export the Flash videos from MTS file on Windows or Mac for free. To convert MTS file to FLV, you need to download and install VLC on your computer.

Step 3. Check the Convert in Settings area, and click the drop-down arrow to select FLV as the output format. If there is no FLV file output, you can click Create a new profile icon and create a new FLV profile.

Step 4. Then go to the Destination area and click the Browse button to set the output folder.

Step 5. Make sure you have made all settings done, and click the Start button to start converting MTS to FLV in VLC. 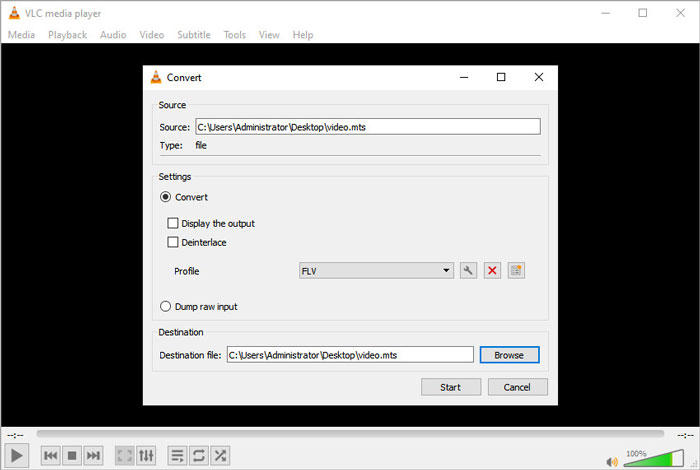 What is the MTS video format?

A MTS file is a video that saved in the Advanced Video Coding Definition (AVCHD) format. MTS file is the standard video format used by many Sony and Panasonic HD camcorders. It is also used for storing high-definition video on Blu-ray discs.

How do I convert MTS files to MP4?

With FVC Free MTS Converter, you can also convert MTS file to MP4. Click Add File(s) button to import the MTS files. Then go to the Output format and choose MP4 as the output format. After that, click Convert button to start converting MTS to MP4 for free.

Yes. You can use Windows Media Player to play your MTS files. If the MTS file failed for playback, you can try other MTS players like VLC Media Player, 5K Player, FVC Free Video Player and more.

In this article, we mainly talked about 3 methods to convert MTS files to FLV for free. You can try all the above MTS to FLV converter to export flash video files for uploading. This Free MTS Converter can easily change your MTS files to FLV, MP4, WMV, VOB, MP3 and more at fast speed.