MKV vs MP4: What Are the Differences and How to Convert

MP4 and MKV are two of the most frequently-used video file formats, also called container formats. Containers are a collection of files containing all the components of a video including streams, metadata information such as the title, copyright holder, and creation date, and more. As a container format, they are both popular and have good quality. So, MKV vs MP4, which is better? What are the differences between MKV and MP4? To get the answers to the above questions, you can read this post about the comparison of MKV vs MP4.

MKV, also known as Matroska (Matroska Multimedia Container), was developed in 2002 by Steve Lhomme. It is a free and open-standard container format that doesn’t need any license requirement. Matroska is able to contain video, multiple tracks, image, subtitles, etc., so you can find Matroska in Matroska video files, Matroska audio files, Matroska subtitles files and Matroska stereoscopic/3D video files. In addition, WebM files are a major subset of Matroska.

Matroska can be used for DRM due to its general encryption capability. The MKV container uses a block-oriented structure so that software can encrypt the structure of a DRM-protected file and execute operations on it. If you’re going to use a video container format for long-term retention, the MKV format would be a better choice.

A file with the MP4 file extension is an abbreviation for an MPEG-4 Video file, which is created by the Moving Pictures Experts Group (MPEG) in late 1998, as a standardized video coding format. Owing to its wide and varying use, it becomes one of the most popular container formats that can hold video, audio and subtitles images, chapters in a single file. Similar to MKV, it can also store advanced content such as 3D graphics, menus and user interactivity.

Many codecs are officially registered for MP4 like H.264 (which is the same as MPEG-4, Part 10) and H.265. Other codecs can be downloaded and added to the software. Also, MP4 files can incorporate DRM. That means software can discern the content on it effectively.

Now, you can go to the next part to get the differences between MKV and MP4.

Differences between MKV and MP4

Compare MKV quality with MP4, which is better? As a matter of fact, it's the codec that determines the quality, not the container. Although MKV has a larger size than MP4, this doesn’t mean that MP4 has lower quality than MKV. Both MKV and MP4 can encapsulate the same video and audio and preserve almost all original quality.

Given to its compatibility with additional functions, multiple audio tracks and subtitles, MKV is larger than MP4. While MP4 videos have great compression that makes the file size much smaller than other video formats. This also makes MP4 a portable and network-friendly video format.

MKV vs MP4: Compatibility and Usage

In terms of video editing and playback, MP4 has better compatibility than MKV. You can play MP4 video on many devices like media players, iPhones, iPad, Android phones without much effort. But for playing MKV, usually the pre-installed media player is not able to play an MKV file. You need to make use of a third-party tool to do it.

How to Convert Between MKV and MP4 Online

To convert videos from MKV to MP4 or from MP4 to MKV, you can use an online video converter to help you easily make the video conversion in a few clicks. FVC Free Online Video Converter, an easy-to-use video converter that allows you to convert any popular video files, including MKV, MP4, MOV, WMV, AVI and more with high quality. You can also use it to change MP4 to AVI, export TS to AVI, and more.

It is a web-based tool, so you can make the video conversion online from any browser. Here I’d like to take the conversion from MKV to MP4 as an example to show you the detailed steps to make a conversion.

Step 1. Open https://www.free-videoconverter.net/free-online-video-converter/ and then click the Add Files to Convert button to download and activate the Launcher.

Step 2. When the installation is over, you will see the Open File window. Here, choose the MKV video you’d like to change. You can add multiple MKV files to this program to make a batch conversion for saving time.

Step 3. Next, select the MP4 as the output format, and then click the Convert button to start the conversion. 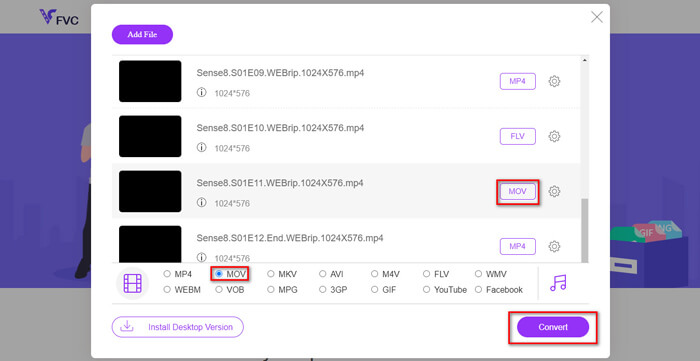 FAQs of MKV vs MP4

1. What player will play MKV files?

For playing MKV files and other formats, I’d like to recommend you to use VLC Media Player which can play almost every format for free.

2. Can I use VLC Media Player to convert MKV to MP4?

Yes. You can convert MKV files to MP4 format with VLC Media Player. If you already have VLC on your computer, you can have a try.

Usually, MKV has a larger file size than MP4 videos owing to the support for the additional features, multiple audio tracks, and subtitle tracks.

From the above MKV vs MP4 comparison, you may have a rough understanding of the differences between MKV and MP4. As to which format you should choose, that largely depends on your actual needs. If you have any related question, feel free to contact us.